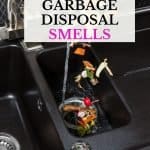 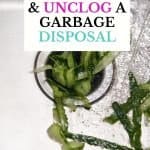 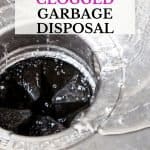 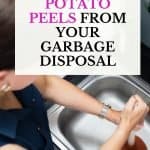 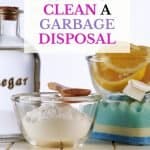 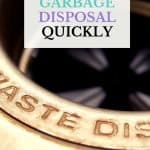 Inside: A smelly garbage disposal is the worst; but what do you do when it starts to smell and clog? Find out what steps you need to take to properly clean out your garbage disposal to keep it running and smelling fresh.

Since the invention of an in-sink kitchen garbage disposal, cleaning up while cooking and getting rid of food that no one’s going to eat has never been easier. There’s nothing better than shoving some food particles down the sinkhole, flipping a switch, and listening to the food being chewed up and swallowed by the garbage disposal.

During cleanup, there are times items fall into the disposal, such as plastic utensils or flatware. These garbage disposal mishaps can make a lovely evening turn into a 7-hour visit to the local emergency department, as well as, cause the blades to get dull.

If a blade is dull, it won’t effectively grind up the food you put down the disposal, causing some chunks to remain in the disposal. The residual food particles are what causes the smell to emit from the garbage disposal.

Not everyone knows the proper way to use a garbage disposal. Heck, I was doing it wrong for over 30-years. Before we move on to learning how to clean it, it would be kinda interesting to see if you’re using your garbage disposal correctly.

Things to avoid putting down your garbage disposal

Don’t feel bad if you’ve put any of the items listed below in your garbage disposal. If you did, you’re in good company. I’ve done it all; learned the hard way, and won’t ever do it again.

Asparagus, celery & corn husks –  Although you would think these would be pretty safe to shove down the garbage disposal, all of the items mentioned have stringy fibers that can get caught between the blades, causing your garbage disposal to stop working.

Bones & pits – Avoid placing any type of bone (fish, chicken, meat, etc..) down your disposal. It’s too hard and will damage your blades. The same thing goes for pits, such as avocado, peach, and even apple pits. As a general rule, if the item is hard, throw it in the trash can.

Eggshells – When an eggshell is ground up, the membranes turn into a sand-like substance that can adhere to the blades, causing your garbage disposal to clog.

Grease – When you’re draining out the grease from your hamburger meat into a glass jar or whatever you store grease in before throwing it out, there are times grease seems to miss the jar opening and slither down the drain. If that happens there’s no need to be overly concerned, but if you pour an entire saute pan of grease down the garbage disposal, you’re looking for a lot of trouble.

If grease does make its way down your drain, immediately run cold water. The cold water will harden the grease allowing it to be ground down into small chunks and be taken away from the disposal. If you use hot water, the grease will stick to the blades of the disposal, which will almost always eventually require you to take the disposal apart or to call a plumber.

Potato peels – Potato peels fall into the same category as pasta and rice. Although it’s not impossible, by far, trying to unclog a garbage disposal that was clogged with potato peels is something you’d want to avoid, especially if you don’t have a double kitchen sink.

How to use a garbage disposal

How to reset your garbage disposal if it’s not working

If your garbage disposal overheats or shuts down due to overuse,  you’ll need to reset it.

Peachy safety tip: Before unclogging a garbage disposal, always make sure the disposal switch is turned in the off position. As another line of physical safety, take it a step further and remove the plug from the outlet. Never put your hands in a garbage disposal, regardless if it’s turned off.

How to clean out a garbage disposal

Regardless if your garbage disposal is smelly or not, you should make a point to clean it out on a weekly to monthly basis.

Clean the splash guard. The splash guard is the black piece that attaches to the drainage hole in the sink. The underside of the flaps gets pretty gross. If you can remove the guard, you’ll want to do so, but if your disposable doesn’t allow that, you’ll want to pull the flaps up and clean them with a small kitchen brush and warm soapy water. You’ll want to pay close attention to the grooves and crevices.

Even though the garbage disposal is turned off, freak accidents have been known to happen. Just remember, nobody wants to deal with having to clean pieces of your finger out of the disposable.

Clean the garbage disposal. Once you replace the splash guard, you’ll want to do the following 3-step process. Make sure you turn the power back on.

Step 2: Grind up ice and salt to clean and sharpen the blades.

Step 3: Grind up lemon peels to freshen your garbage disposal. If you don’t have lemons you can use grapefruit, lime, or orange peels.

How often have you cleaned your stinky garbage disposal?

Do you clean your garbage disposal daily after each use, weekly, monthly, or never? Don’t worry, if your answer was “never”, I promise there will be no judgment. Share in a comment. 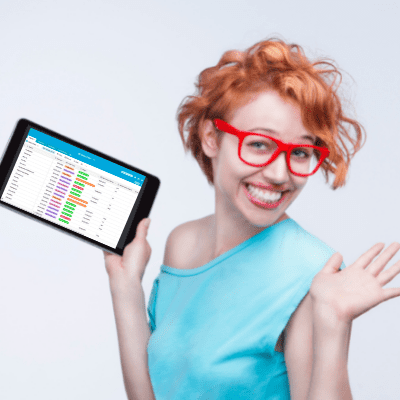 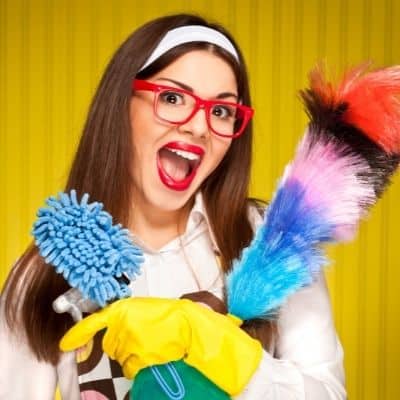 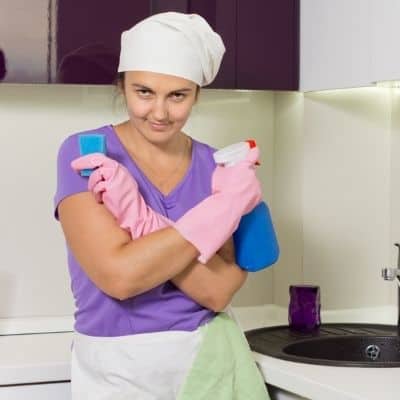 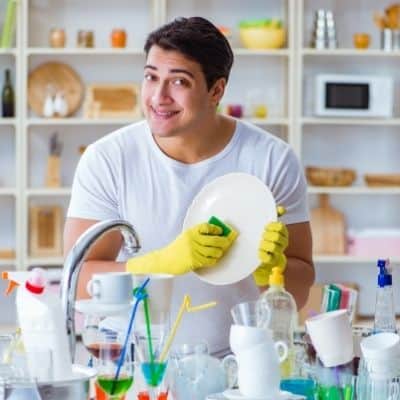 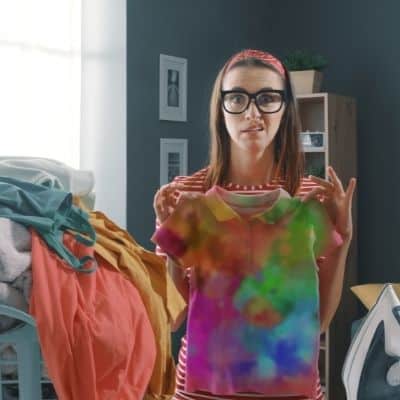 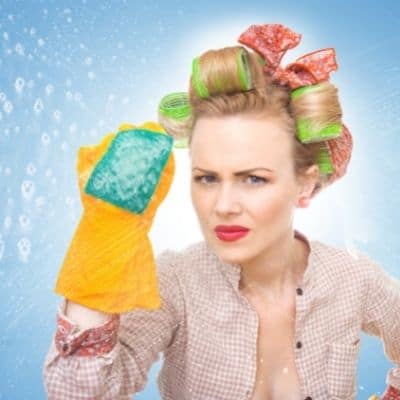